This is a selection of thirteen still lives of prepared food, from a series painted in 1997. It’s as many as I could recover at present. Twelve of them were exhibited at Pinacotheca gallery in Melbourne in 1998 (26th August – 19th September) in tandem with the Serenades series. Following Deep Shopping I wanted to look further at the theme of display and representation. Eventually I settled on prepared food as a suitable example, feeling that a switch to still lives might sharpen a few issues for me, give the figures and psychology a rest. Importantly, the works again scaled down slightly. I was becoming an easel painter! Albeit, one without an easel.

This was the first show where I thought my catalogue notes did justice to the works. So I’ll quote them. ‘Acquired Taste deals with supposedly appetising arrangements of food, yet the pictorial ambiguities and unusual cuisine make for some hesitation. How are we to sort out just what counts as food and not the way it is displayed or the way the display is pictured? We cannot. A good part of the making of food has to do with the way it looks, so its display strictly starts with ingredients and recipe. By the same token, a good part of display overlaps with pictorial concerns, in matters of point of view, composition, colour and depth. What counts as food turns out to be as blurred as displays or pictures.’ Or, pictures can enhance the flavour, acquire a taste.

I thought this was quite a successful series, with its absurd cuisine titles and rich, warm palette, owing much to advertising photography. At the same time I didn’t want to just refer to photographic practices or underline a genre, as others have done. I do not accept pure print qualities, even in general matters of composition, anymore than I accept pure painterly form. Or, I distrust the whole as much as its foundational parts. All the same, I suspect some of the success of the series rests with a readily discerned genre confining my versions. This success, however, was limited. Nothing sold and it failed to attract a review. 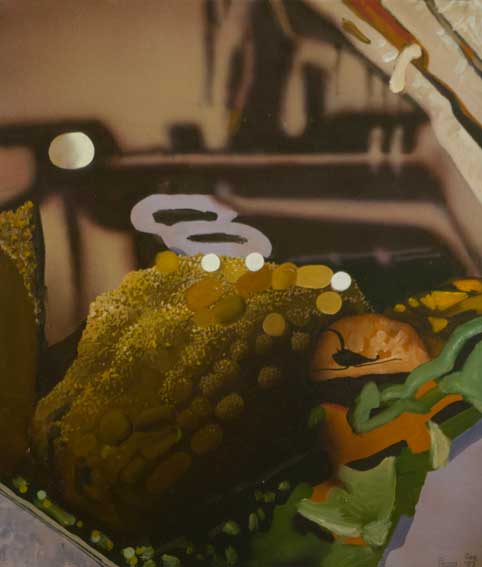