I attended the National Gallery of Victoria Art School, in Melbourne, between 1971 and 1973. I was told it was the best art school in Australia and so I applied there from Glenbrook in the Lower Blue Mountains in NSW, in my final year of high school. I was going on 18. I imagined everyone there would be exceptionally skilled and wildly ambitious. I assumed there would be renowned teachers to guide and advise us on current developments in the art world. I was wrong. I was naïve.

As it turns out, most art schools are pretty much the same. There are skilled and ambitious students there, but they only comprise about 10% of students. There are prestigious teachers there, but they are drawn from a narrow, fashionable faction and rarely stayed long. As people, they were mostly okay and at least didn’t hinder my development. From the first year it was made clear we were to think of ourselves as already artists, and to pursue our development independently, seriously. The lecturers were just another resource, we could use if we needed. The painting lecturers were all fairly young abstractionists and abstraction didn’t interest me. They pretended to be able teachers of figuration as well, but judging from their own practice obviously their hearts were not really in it. They might talk the talk but they did not walk the walk. They thought, implicitly or explicitly, that abstraction was the future of painting and basically pushed a Greenbergian line. I listened politely and voted with my feet. I wasn’t the only one. I was more interested in Pop Art. They thought Pop Art was some fleeting and unfortunate aberration. I thought the same thing about Minimalism. I kept my distance from the staff.

Pop Art didn’t really have any formalist champions. Critics advocated it as part of broader social and political policies. So the debate tended to be between social involvement and formalist isolation or purity. One side turned socialist, the other spiritualist. I spent a lot of time in libraries reading up on it all and at Melbourne University Film Society screenings, catching up on art cinema. I started making super-8 movies. In 1972 I found a book of cinema criticism titled Signs and Meaning in the Cinema by Peter Wollen. It advocated a semiological (we now use the term semiotic) approach to analyzing films, following the work of C. S. Peirce who had coined the term semiology. Rather than posit some reductivist essence to movie images (which was probably just the shadow of the Yankee imperialist jackboot anyway) Wollen argued it was more productive to accept overlapping layers or modes of meaning within a work. Never mind about whether they were unique to the medium; the medium was whatever the medium did. Semiology proposed a tripartite taxonomy of signs, as icon, index and symbol. An icon is a picture and deals in an intuitive resemblance to its subject matter, an index is an automatic symptom or gauge of its content, like a thermometer or wind sock and a symbol was an arbitrary convention such as writing or numbers. All were valid avenues of signification; each enabled native, specific meanings and all were available to the cinematic image, determined specific aesthetics or rules for beauty in the cinema. Four years later in London I actually got to meet Wollen – thrill! But by then I was concentrating on cinema as well.

Back in 1972 I began to think of painting along semiological lines. Icons obviously applied to realism or figuration, indexes measured gestures and painterly expression, symbols allowed text, logos and various graphics. Effectively, this provided a formalist rationale for Pop Art. But I wasn’t interested in becoming a critic at that stage. I was interested in different ways I could combine and merge the three modes. I suppose I was Post-Pop. In my final year the work grew more consistent, using parts of movie stills (a valid  sub-text under a semiological aesthetic) abstracted or symbolic shapes, painterly gesture and explicit reference to time and place (as either symbol or index). I thought of myself as somewhere between Richard Hamilton and Larry Rivers, going on Jean-Luc Godard – who remains my true hero. 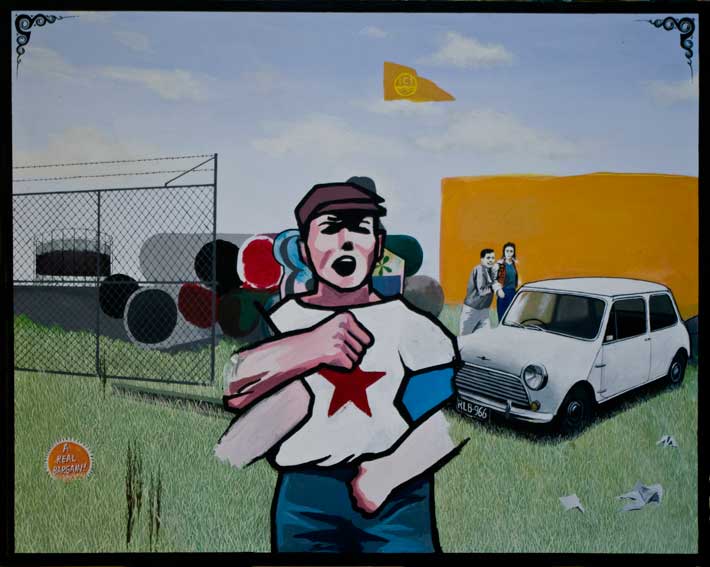 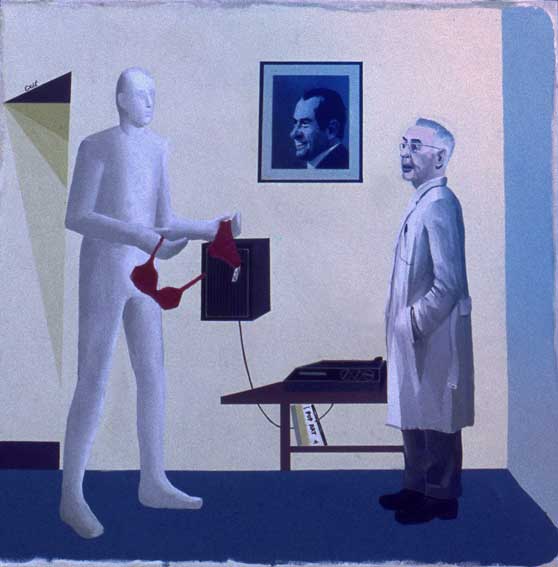 The Two Girls suite was reworked in 1986, partly as restoration prior to new framing. There’s a few more collaged elements in there now.

But in 1973 talk about semiotics or semiology in painting met with blank looks; occasionally indulgent smirks. Some people didn’t like hearing about stuff that perhaps had some bearing on their area of expertise. At my final assessment there was grudging acknowledgment of at least an independent line of inquiry, but the suspicion was really that the paintings were just about being a frustrated movie maker. Maybe that’s why I didn’t figure in any of the preceding little shows, prizes or scholarships for third year students. They were right about the frustration part of it. It was clear I was being voted off the island. They were a little surprised I wouldn’t be going on to the post-graduate course (another two years) but beyond a studio space, the place didn’t have much to offer. Maybe as some sort of consolation, they offered to buy the series of Two Girls lithographs for the school’s collection. More likely, it seemed only as a fitting tribute to the printing lecturer, Allan Mitelman, who had single-handedly rescued my incompetent lithographic technique with these. In any case I declined, saying I was thinking about film school, didn’t want to think of myself as a fine artist henceforth.

I think a sole surviving example from my first year is this rather plodding effort at using ‘the grid’ – at the time a near-religious experience for formalists.