The ten portraits were done as a suite, a bit like Gerhard Richter’s 48 Portraits (1971-2) or 8 Student Nurses (1971) but less related to photo IDs, more stylised or icon-like. Each is 33 X 28ins – 78 X 55cm, acrylic on canvas and painted in June 1999. The subjects range from various scientists (Mandelbrot, Penrose, Kelly) to novelists (Barthelme, Dick) a composer (Riley) a DJ (Peel) a film director (Godard) a philosopher (Goodman) and an art historian (Gombrich) all of whom I admire. So it’s a bit of a private pantheon of intellectuals, but more importantly, the diversity of the group echoes variations in treatment, within and between works. Conversely, affinities or likeness finds underlying consistencies to person and style of picture, should we delve deep enough. The style in some way reflects the subject. The subject to some extent is part of the style. We make out the person as we make up the picture.

These were shown at the Mass Gallery, in Melbourne in 2000 (25th Oct – 4th Nov) and were probably my least popular exhibition, which is saying something. One middleaged lady, the daughter of a famous Australian painter, swept through the show (she was only really attending the opening in the adjacent room) with the response “They remind me of Francis Bacon”. Uncertain of her tone, I replied “I’ll take that as a compliment” to which she replied icily, “It’s not” and departed.

I gather objections mostly ran along the lines of the paintings not being loose or painterly enough and stranding my style in caricature. It’s true the works are linear rather than painterly (to observe a traditional distinction – tonal rather than colourist would also be true) and the likenesses unquestionably exaggerate some features of the subjects. But as much as I like caricature and comics, I don’t feel these issues are foremost in the work. I see the series as essentially about construction and I’ve kept them fairly tight (literally centred) rather than loose or spontaneous (and Bacon-like) to emphasise a considered structure and to accommodate various qualities of realism. Thus the works have smooth tonal renderings, attention to texture and modelling, soft or sharp focus to various details, but without the consistency of realism, particularly in print standards. Yet the work equally incorporates bold outline, basic planes and volumes. In other words, the works juggle realism and idealism, formalism and genre; happily balance a likeness against versions of painting, rival traditions of pictures.

The results amount to Cubism before cubes, Surrealism for the formalist, Pop Art for the specialist or Post Modernism for the nostalgic. In short, they lacked likeness for their critics. 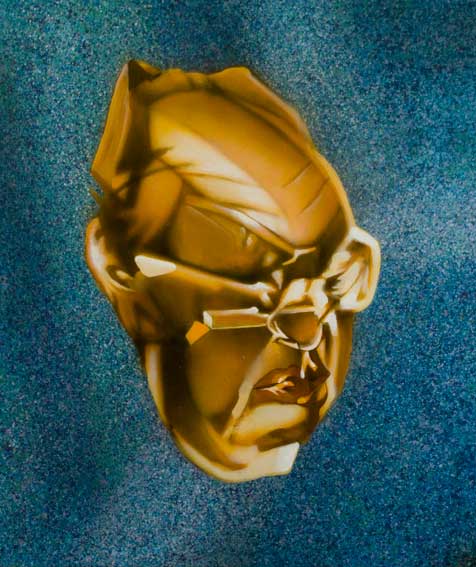 After the show the series was slated to be included in a group show, also at Mass, and I nervously reworked a number of them – Kelly, Dick and Barthelme I think – pathetically hoping for a better response. In the end the curator preferred the Closeups series, so Likeness in its present form has not actually been exhibited, probably never will be.